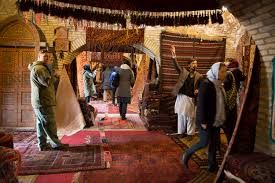 An Afghan rug or Afghan carpet is a type of handwoven floor-covering textile traditionally made in Afghanistan. Many of the Afghan rugs are also woven by Afghan refugees who reside in Pakistan. In 2008, 2013 and 2014, Afghan rug won international awards, which is held every year in Hamburg, Germany. The Afghan rugs are mostly assembled in northern and western Afghanistan, by various ethnic groups but mainly by Turkmen.
One of the most exotic and distinctive of all oriental rugs is the Shindand or Adraskan (named after local Afghan towns), woven in the Herat Province, in western Afghanistan. Strangely elongated human and animal figures are their signature look. The carpet can be sold across Afghanistan with the most based in Mazar-e Sharif.
Another staple of Afghanistan is Baluchi rugs, most notably Baluchi prayer rugs. They are made by Afghanistan’s Baloch people in the south-western part of the country.
Various vegetable, and other natural dyes are used to produce the rich colors. The rugs are mostly of medium sizes. Many patterns and colors are used, but the traditional and most typical is that of the octagonal elephant’s foot (Bukhara) print, often with a red background. The weavers also produce other trappings of the nomadic lifestyle, including tent bags and ceremonial pieces.