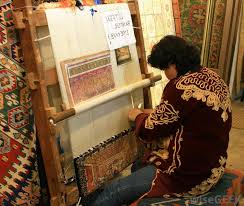 Rug making is an ancient craft, and covers a variety of techniques.

Braided rugs are made by using three or more strips of fabric, usually wool, folding the raw edges to the middle and braiding them together. For an oval rug the center braid should be one inch longer than the width-length in feet. example 2′ x 4′ rug center strip would be 2’2″ long. The center braid is laced together and new strips are sewn on to make the braid longer as lacing continues.

A latch hook for rugmaking.

Traditional rug hooking is a craft in which rugs are made by pulling loops of yarn or fabric through a stiff woven base such as burlap, linen, rug warp or monks cloth. The loops are pulled through the backing material by using a latch hook mounted in a handle (usually wood) for leverage.

Rag rugs were commonly made in households up to the middle of the 20th century by using odd scraps of fabric on a background of old sacking.

Using either yarn or strips of cloth, you work with the punch tool from the back side of the pattern. The Monk’s cloth backing is tightly stretched on to a frame. Every time you punch the needle down through the backing, it makes a long thread on the right side of the rug. Then, as you lift the needle, it automatically makes it into a loop. These loops pack together to create a rug so solid that chewing dogs and clawing cats are its only enemy. As long as you use the tool correctly, it will automatically make all the loops the same length.

Sometimes referred to as “speed hooking”, this method of rug hooking is liked for its ease and speed.

Proddy rugs are made, as the name implies, by prodding or poking strips of fabric through burlap or linen from the back side. Rag rugs made this way have many names; clippies, proddies, stobbies, pricked, in Northumberland they are called proggy mats, and in Scotland they are called clootie mats. They were often made for more utilitarian use such as by the backdoor; their pile hiding dirt well.

Handmade and machine-made. See carpet. Woven rugs include both flat rugs (for example kilims) and pile rugs.The more tightly a rug is woven or knotted, the more detailed a design can be. “It is generally believed that the density of knots, the age, the material, and the rarity of the design or knots determines the value of a carpet.