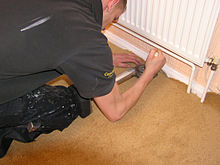 Fitted carpet, also wall-to-wall carpet or carpeting, is a carpet intended to cover a floor entirely. Carpet over 4 meters in length is usually installed with the use of a power-stretcher (tubed or tubeless).

Fitted carpets were originally woven to the dimensions of the specific area they were covering. They were later made in smaller strips, around the time stair carpet became popular, and woven at the site of the job by the carpet fitter. These carpets were then held in place with individually nailed tacks driven through the carpet around the perimeter and occasionally small rings in the carpet which were folded over.

The introduction of tack strip, “tackless strip”, “gripper strip”, or “smoothedge”, simplified the installation of wall-to-wall carpeting, increasing the neatness of the finish at the wall. Because gripper strips are essentially the same thickness as underlay, using gripper strips yields a level edge, whereas tacking gives an uneven edge.

There are three types of carpets: the loop pile carpet, the cut carpet and the structured carpet, combining the first two. Very popular in the sixties thanks to its colorful prints, most carpets took a decorative appearance inside houses.