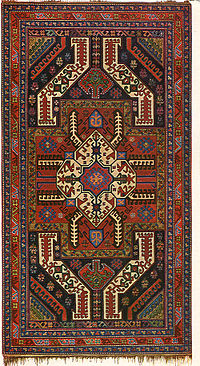 Gasimushaghi carpets are broadly spread in carpet weaving points of “Carpet weaving schools of Karabakh”. Earlier it was woven in a village called Gasimushaghi obasi and its production also developed in this village and especially in Şamkənd, Ərikli, Kürdhacı, Chorman and Shalva villages.[1] Development in production of these carpets in these villages based on rich raw materials and ancient history of handicraft traditions. Gasimushaghi obasi village provided its residents with special raw materials such as wool and natural colors made of plants. These carpets are also unique and are still saved in several museums of the world.

Masterly made arrangement of ornamentations of the whole composition of the central part of Gasimushaghi carpets arouse interest. No part of the background of the middle and external area of the carpet stayed unused.

There is a large medallion consisted of various figures, details and elements in the center of the carpet. Upper and lower corners of Gasimushaghi carpets are woven from white wool and are S-shaped (“gol”). S-shaped corners are peculiar for Gasimushaghi carpets and there is an appearance of a dragon in these S-shaped corners. Sometimes these carpets are called “Aggol khalcha” (Carpet with white hands) by local population. All other ornaments are woven with a hook and it is believed that these ornaments defend people from evil spirits.

Like other carpets of Karabakh’s carpet weaving school such as “Khanlig”, “Bahmanli”, “Garagoyunlu” and “Talish”, Gasimushaghi carpets also are dense, with high level of knots, soft and light. Turkbaf knot is considered the basis of Gasimushaghi carpets.

In 2007, an exhibition of Caucasian carpets was held in Prague.Some Czech representatives became familiar with some Azerbaijani carpets of Karabakh School and after a while the Czech Republic released postal stamps with the picture of Gasimushaghi carpets with an inscription saying “Karabakh carpets in the 19th century”