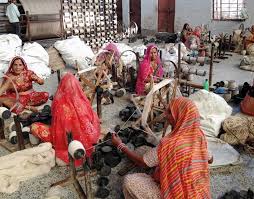 Probably because of the region’s warm climate, which does not require protection from cold, the knotted carpet was unknown in India until the 16th century. Indeed, the knotted carpet exists in India not because of an age-old tradition but because of an act of importation, carried out by the emperor Akbar (reigned 1556-1605).
Akbar, the greatest ruler of the Mogul dynasty (1526/27-1858), was an admirer of Safavid art and had artists and artisans sent from the Persian court to set up specialized workshops in Agra and Fatehpur Sikri, the two capitals of his empire, as well as in Lahore, in modern-day Pakistan. Therefore in India the knotted carpet originated as a product made exclusively for the court and conceived of as a precious object of furnishing designed to beautify the palaces of the Mogul court. Because of this close connection to the Mogul court, the knotted carpet was inevitably destined to decline when that court declined, which it began to do toward the end of the 18th century.
The Indian rug came into being to serve the same purposes as the “classic” Persian carpet and, in fact, imitated both Persian technique and style: asymmetrical knots with fine knotting; use of precious materials, such as the highest-quality wool from Kashmir and sometimes even silk and gold and silver threads; production based on cartoons furnished by court miniaturists; curvilinear style; and designs of the floral and figural character. Given the lack of intact examples from the 16th century, the most important existing records of this direct dependence on the art of Persia is offered by the so-called Indo-Isfahan or Indo-Persian carpets, datable to the 17th and 18th centuries and characterized by Safavid designs composed of in-and-out palmettes, herati, and sometimes cloudbands in orderly full-field arrangements. Initially attributed to Persia, and more precisely to Herat, these carpets were later divided into two groups based on their palettes and levels of calligraphic sense: those with the most intense colours, with lac-red grounds and designs with pale outlines or no outlines at all, were taken to show Indian sensibility, and the others were said to show Persian taste. Since these are such minor differences, the recent tendency has been to leave provenance undecided and to see these carpets as proof of the close relationship between the Safavid and Mogul courts and attribute them to a common Indo-Persian style.