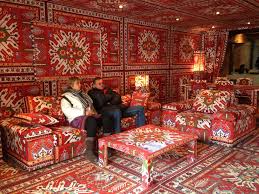 The Gultapin excavations discovered several carpet weaving tools which date back to the 4th-3rd millennium BC, mostly of Armenian origin. According to Iranica Online “The main weaving zone was in the eastern Transcaucasus south of the mountains that bisect the region diagonally , the area now comprised in the Azerbaijan SSR; it is the homeland of a Turkic population known today as Azeri. Other ethnic groups also practiced weaving, some of them in other parts of the Caucasus, but they were of lesser importance.” Azerbaijan was one of the most important centers of carpet weaving and as a result of that, several different schools have evolved. While traditionally schools are divided into four main branches, each region has its own version of the carpets. The Schools are divided into four main branches: Kuba-Shirvan, Ganja-Kazakh carpet-weaving school, The Baku carpet school, Karabakh school of carpet weaving.

Brussels Wilton The Brussels Loom was introduced into England towards the middle of the eighteenth century marked the beginning of a new era in carpet-weaving. It was the first loom on which a pile carpet could be woven mechanically, the pile consisting of rows of loops, formed over wires inserted weftwise during weaving and subsequently withdrawn. Brussels was the first type of carpet to be woven in a loom incorporating the jacquard pattern selecting mechanism and in 1849 power was applied to the loom by Biglow in the U.S.A.

Later when bladed wires were developed the pile loops were severed on withdrawal of the blade wires to produce a carpet known as Wilton. after this development the loom became known as the Wilton loom, and in modern usage the designation wilton applies to both cut-pile and loop-pile carpets made in this loom. The latter now variously described as Brussels-Wilton, round wire Wilton, loop-pile Wilton, and round wired jacquard. the methods of manufacture, including the principles of designing, preparatory processes, and weaving, are the same in most respects for both Brussels and Wilton qualities. The chief difference between them is that whereas Brussels loop-pile is secured satisfactorily by the insertion of two picks of weft to each wire ( 2-shot) the Wilton Wilton cut-pile is sometime woven similarly ( 2-shot) but more often with three picks of weft to each wire ( 3-shot) to ensure that the tufts are firmly secured in the carpet backing.

Brussels carpet have a smooth slightly ribbed surface and their patterning is well defined, a characteristic feature of the cloth. Closeness of pile rather than height contributes to their neat appearance and hard wearing properties, although they do not simulate the luxury of cut-pile carpets.