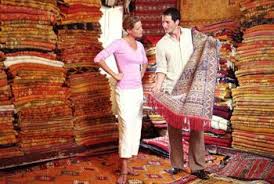 A number of techniques evolved to deal with the problem of the slit that was formed using the above technique. These techniques developed in the Near and Middle East, but were not used so commonly in Anatolia. Dove-tailing (also known as shared warp or single interlock weave) refers to the wefts from two different color blocks, returning (in opposite directions) around the same warp that forms the boundary between them. With the double interlocking technique, wefts from adjacent color fields interlock with each other between the warp threads that run between them. With both of these techniques, the striking contrast of the colors that is created using a slitweave is lost, resulting in more blurred designs. Nevertheless, they are main techniques to be used for strong joins between vertical color blocks.

This is the common name for weft wrapping technique used to create complex and varied designs. Colored yarns are wrapped around the warps following mathematical patterns that allow the weavers to create free flowing intricate designs that form reliefs on the surface of the work. Because it is a time consuming technique, it is commonly alternated with thin plain-weave ground wefts and often used for smaller works such as bags, prayer sheets and mats.